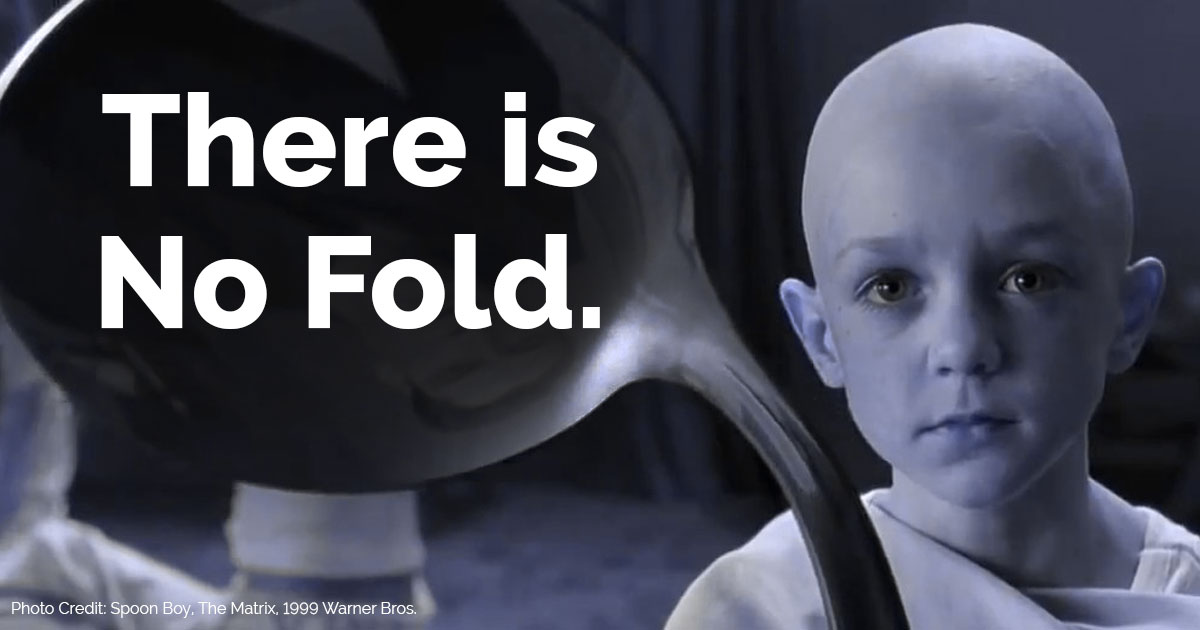 “Do not try and design the fold. That’s impossible. Instead, only try to realize the Truth… There is no fold… Then, you’ll see that it is not the fold that designs, it is only yourself.”

If you have been in the website design field for any amount of time, chances are that you’ve heard the phrase “above the fold”. While the idea is conceptually a good one, its application for the web in the modern era falls short of its previous standard.

The ever-expanding number of devices with differing viewports is one of the biggest hurdles to overcome when considering “above the fold” design.

Which fold do you go with?

None of the above. Because “the fold” doesn’t exist anymore.

Here are a few reasons why “above the fold” is an outdated concept and how we arrived at the “no fold” web:

First, consider the source of the idea; Newspapers. The phrase “above the fold” harkens back to the early era of newsprint.

Simply stated, it’s the top half of a folded tabloid page that a reader sees first. Oftentimes, it’s the only portion a reader sees. It’s the prime real estate often saved for the most important attention-grabbing news and the highest-paying advertisers.

When print was in its infancy, simple words on a page were enough for someone to pick up a page and begin reading. Assuming they could read, of course.

However, as time went on, printed materials were produced in greater numbers and with larger page counts. It soon became necessary for printers to begin exploring alternative solutions for standing out from the crowd.

So, “above the fold” became the area where news organizations would use the principles of typography and layout to influence passers-by to pick up their paper instead of the competition.

A similar trend emerged for website design in the late 1990s and early 2000s. As more websites were built for monetization, more focus had to be put on end-users’ first impressions to draw them into the “sales funnel”.

So, having all of your attractive content and calls to action at the top of the page became a major focus for designers and marketers alike.

This became the new “above the fold” for a digital era.

The practice became so widely-used that a 2006 study by Jakob Nielsen found that 77% of visitors to a website did not scroll down further than the “above the fold” space provided. Further studies at the time also showed that most of the content below the fold was overlooked because it was perceived as less important.

But, just a year later, all of that changed.

In 2007, Apple released the first iPhone, which essentially gave users a handheld computer with touch controls.

Apple had a great deal of success in 2001 after breaking away from its focus on the Mac line of computers and into the wider consumer market with the iPod. A number of versions and variants of the iPod were made and, pretty soon, Apple became a household brand.

When the iPhone was released, it included apps like the Safari web browser, Maps, and YouTube. All of these required the user to scroll using the 3.5-inch screen’s touch interface.

In 2010, Apple released the first generation of the iPad tablet. At this point, touchscreen technology had become more common and most mobile devices had replaced physical keypads and keyboards with touchscreens.

The popularity of Apple products virtually skyrocketed after 2007 and the average age of the userbase decreased as more children and teens were introduced to the technology.

4. Responsive Design For The Win

Because screen sizes change to varying degrees on every device and orientation, it’s impossible to state a true “above the fold” for website design. Even giving it an arbitrary measurement cannot conceptually accommodate “the fold” the way that Responsive Design can.

Responsive Design allows web designers and web developers to intelligently build user interfaces that provide access to the most important aspects of a website without the need to sacrifice “above the fold” space.

Prior to 2006, experience design and user interaction on websites may have been more superficially motivated. But, with the widespread adoption of touchscreen technology, we are free to move away from concepts like “the fold” and better able to focus on the more beneficial elements of User Interface and User Experience design.

Today, younger audiences are already inclined to scroll due to the technology they’ve grown accustomed to.

To them, “the fold” never existed in the first place.

Are You Ready To Discover What Mind Can Do For You?